Juggling – what is good for? Academic skills, learning, health and more! 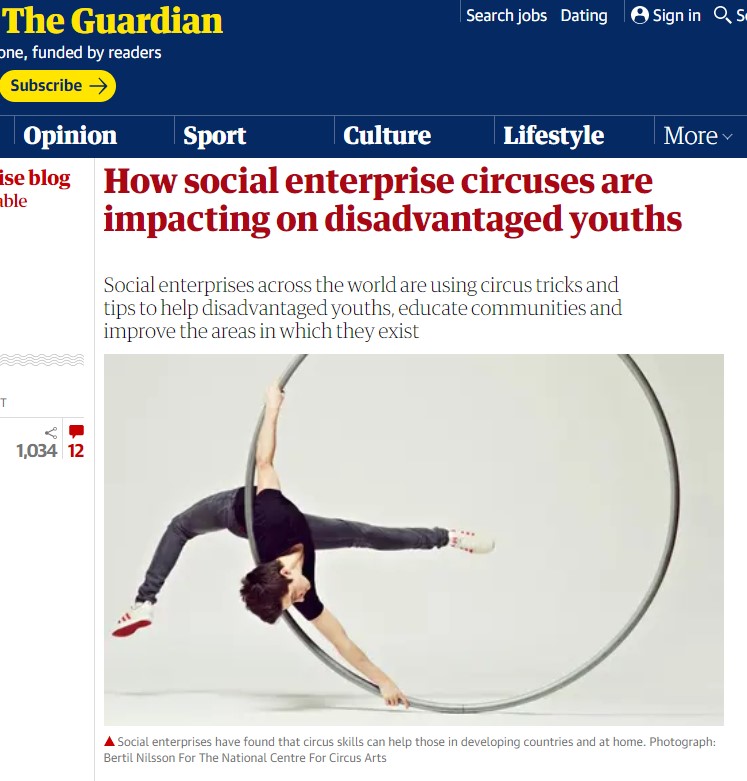 There are an increasing number of reports being published about the effects and benefits of social circus activities and circus-skills training in schools.

Juggling is good for you! Not only directly – better hand-eye co-ordination, concentration, response-times – but there are positive effects on learning other skills and  academic results, it seems.

Here are a few articles and reports to read.

… several teachers and administrators recently told Education World that they’ve seen students’ schoolwork improve after the kids learned to juggle. Improvements in concentration, eye-hand coordination, fine motor skills, reading, and behavior are just some of the benefits of juggling cited by educators. Included: Tips on using juggling in the classroom. 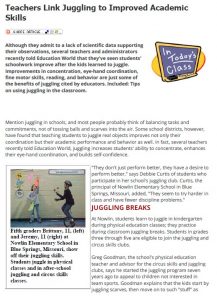 Juggling the timetable: why every school should teach circus skills in PE lessons 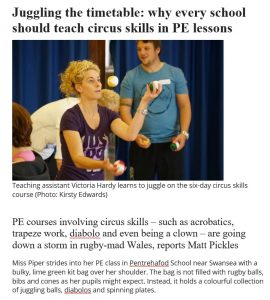 PE courses involving circus skills – such as acrobatics, trapeze work, diabolo and even being a clown – are going down a storm in rugby-mad Wales, reports Matt Pickles

Miss Piper strides into her PE class in Pentrehafod School near Swansea with a bulky, lime green kit bag over her shoulder. The bag is not filled with rugby balls, bibs and cones as her pupils might ­expect. Instead, it holds a colourful collection of juggling balls, ­diabolos and spinning plates.

If you play Basketball, Baseball, Football, Soccer, or any other ball sport, JUMPUSA has a big piece of news and advice for you this week: Learn how to JUGGLE! Always a great party trick and useful for circus performers, juggling is a neuromuscular skill that can have a profound impact on your sport. Among other benefits, juggling improves: Ambidexterity, Hand-Eye Coordination, Depth Perception, Peripheral Vision, Neuromuscular Balance, Quickness Under Control, and Concentration for such activities as Baseball hitting and Basketball Free throw shooting.

Not only that, scientists have recently discovered (Nature 1-04) that learning to juggle causes cellular changes in areas of your brain. Mastering the skill increases the amount of gray matter in areas of the brain that process and store visual information, proving what was not thought possible — that new stimuli can alter the brain’s structure. So learning to juggle will not only help you see the ball, see the defenders, and see plays develop, juggling skills once learned will make you smarter!

“Juggling works! Not only did my handles get better but my court vision just got ridiculous. My focus has increased to the point where I can see the game as a big picture. I can see everything that’s happening on the court and as a result I’m dropping more dimes and giving passes that you have to see to believe.” — Angelo B

The Mathematics of Juggling

Given that the study of mathematics is at least 3,000 years old and the earliest known record of juggling was recorded by the Egyptians around 1800 B.C., it is interesting to note that no serious mathematical study of juggling occurred until Claude Shannon’s work on his famous juggling theorems in the 1970’s. Shannon proved the first mathematical theorems on juggling, but it was not until the mid 1980’s that other mathematicians began to seriously study juggling patterns. Apparently three groups of people developed similar mathematical ideas on which this book is based independently: Bengt Magnusson and Bruce “Boppo” Tiemann at Caltech, Paul Klimek at UC Santa Cruz, and Adam Chalcraft, Mike Day, and Colin Wright at Cambridge (as with many discoveries, who was “first” may be in dispute here, but these are the discoverers according to Polster). Therefore, it is not surprising that since the 1980’s a great deal of mathematics has been applied to the study of juggling, as both disciplines are essentially about patterns. The Mathematics of Juggling (hereafter referred to as TMOJ) by Burkard Polster is the first book of which I am aware that brings together much of this information into a single, unifying source, and it succeeds. Polster, according to the website at his institution is the Senior Logan Research Fellow in the School of Mathematical Sciences at Monash University, Australia, and as might be expected, he is also a juggler. In fact, according to the introduction of his book, around 40% of serious jugglers also have a mathematical background.

Abstract
A small-scale exploratory study undertaken from January to July 2004, using unrelated samples was conducted to ascertain whether kinaesthetic training had a beneficial effect on learning, literacy and self-esteem in children with literacy difficulties, and was a sufficiently motivating, manageable and cost effective
approach to alleviate these difficulties.

22 children aged 8 – 11 years in an Exeter middle school who were demonstrating literacy levels up to four years below their chronological age were allocated to an experimental (kinaesthetic training) or control group (on the waiting list for such training) matched as much as possible by age, sex, class teacher, literacy level and handedness. All were subjected to a battery of assessments before and after the training programme, which was conducted over a period of six months.

The results are encouraging. The majority of the children wholeheartedly recommend learning to juggle as a result of the training. Teachers noted improvements in mental alertness, confidence and self-esteem among children in the experimental group. However, there was a mixed response regarding discernable progress in literacy skills.

Variations in the amount of practice children did between sessions, the extent to which the less co-ordinated children took to juggling, and the nature of the literacy difficulties may have affected the results.
These preliminary results remain encouraging in contributing towards the development of a manageable, motivating and low-cost exercise package with evident educational benefits.”

How social enterprise circuses are impacting on disadvantaged youths 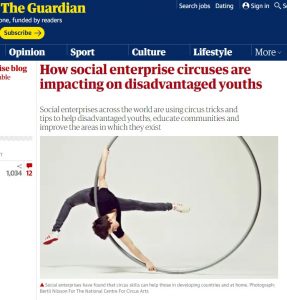 Social enterprises across the world are using circus tricks and tips to help disadvantaged youths, educate communities and improve the areas in which they exist .. The rewards are plenty. “Circus skills can be used to teach life skills, including perseverance, teamwork, trust and positive risk-taking,” says Che. Young people can apply these life skills outside of the circus – which can help make them more employable and taking part in workshops can give a sense of self-worth while boosting their confidence.

The Mental Benefits of Juggling 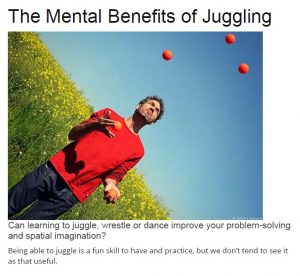 Can learning to juggle, wrestle or dance improve your problem-solving and spatial imagination?
Being able to juggle is a fun skill to have and practice, but we don’t tend to see it as that useful.

But could skills that work out the brain’s spatial centres, like juggling, actually bleed over into other aspects of how the mind works?
A series of studies has begun to show the way the mind adapts to learning new skills like juggling and some of the practical benefits.

Learning to juggle can cause changes in the brain, scientists have found. 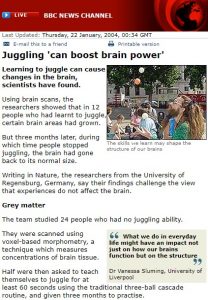 Using brain scans, the researchers showed that in 12 people who had learnt to juggle, certain brain areas had grown.

But three months later, during which time people stopped juggling, the brain had gone back to its normal size.

Writing in Nature, the researchers from the University of Regensburg, Germany, say their findings challenge the view that experiences do not affect the brain.

Juggling provides a series of sequential problems that require the student to calm down, pay attention, listen analytically, observe critically, focus on one activity at a time, plan a learning strategy, go step by step, stay on task, screen out distractions, manage their muscles to act appropriately and with the desired results using successive approximations, persevere through a series of minor failures (drops), analyze final results of the process, and incorporate the newly learned activities into a larger pattern of complex learned activities that can be demonstrated and taught to others. It is a limitless, cumulative, branching model which teaches creative problem solving through direct experience and enhances creativity by offering intrinsic and extrinsic reinforcement with every gain in skill!

Students who understand the step by step learning system used in juggling do well in all their other subjects because they are not intimidated. They improve their attitude toward learning new subjects and acquiring new skills. They do not hesitate to accept challenges, just as they accepted the challenge of learning to juggle. This attitude of confidence and acceptance of risk-taking gives students who are involved in a juggling program a decided edge over those who are not.

Benefits of Juggling and Circus Skills