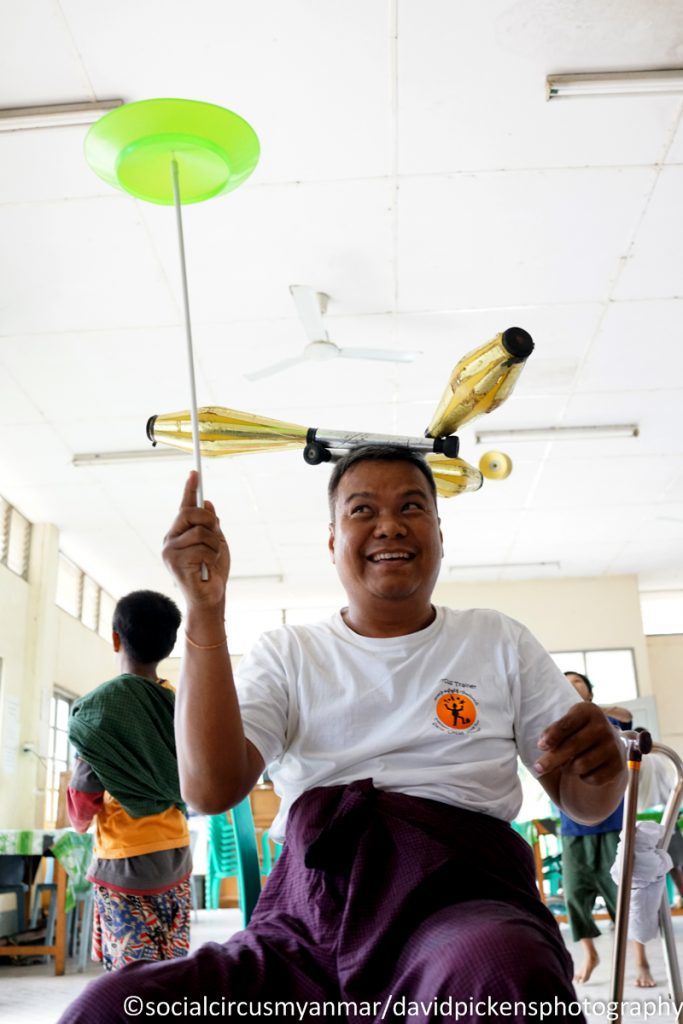 It is with great sadness that we have learned that our dear friend Ko Pho Ke has passed away in Yangon. He passed on October 16th. His funeral took place in Yangon on October 18th. He was a great friend and and inspiration and without him the social circus project could not have happened, and without him there will be a good soul, true spirit and a friendship missing in our circus fellowship.

Ko Pho Ke supported the project from the beginning in 2014 and helped make it possible and a success. Very sadly he became unwell in 2018 with a heart condition. Despite this he continued to help deliver workshops when he was able at the Parami Monastery School in South Dagon, a workshop connection that he created, and he supported that school too.

He was particularly proud to teach and help the disabled children we work with. He had polio as a child and this limited his mobility and affected his health, but despite those challenges he worked as a driver, taxi driver, married and raised a family.

He will be truly missed and mourned. We will do our best to honour his memory and his work with us, his kindness and friendship. Every time we teach the spinning plate – his favourite skill, which he taught to hundreds of children – he will be in our thoughts.

You can hear in his own words how he felt about social circus in this short video documentary. 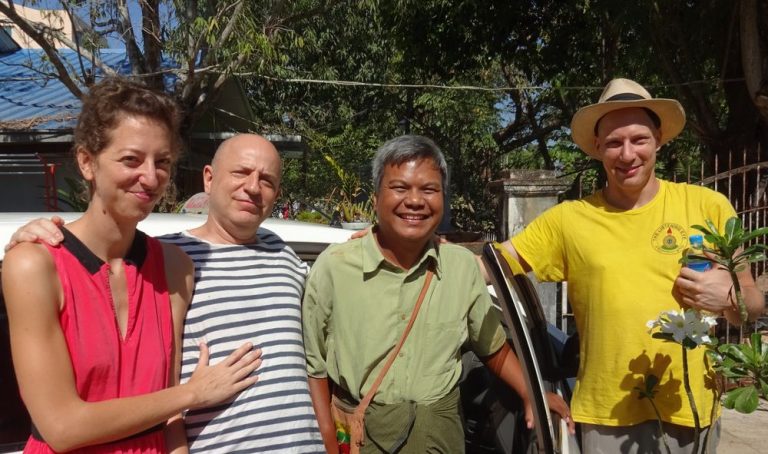 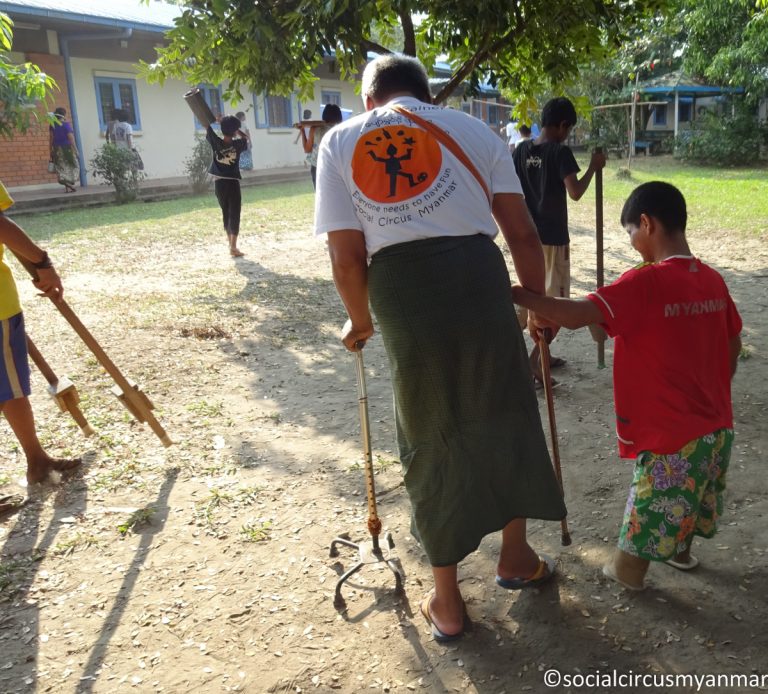 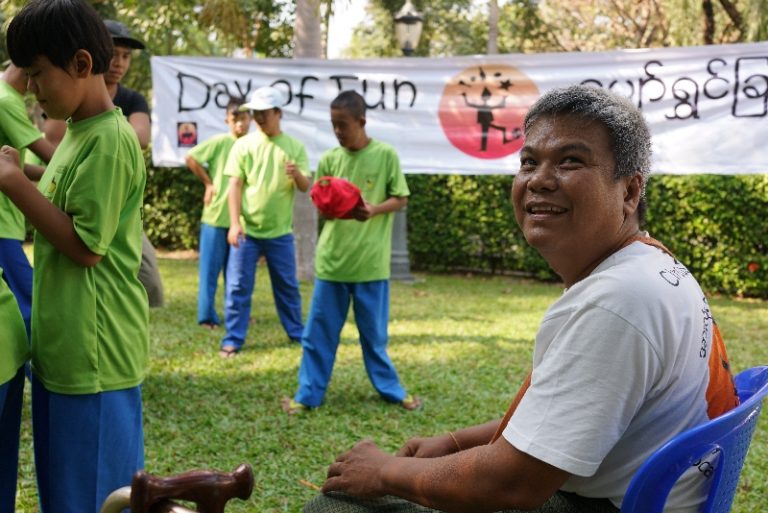 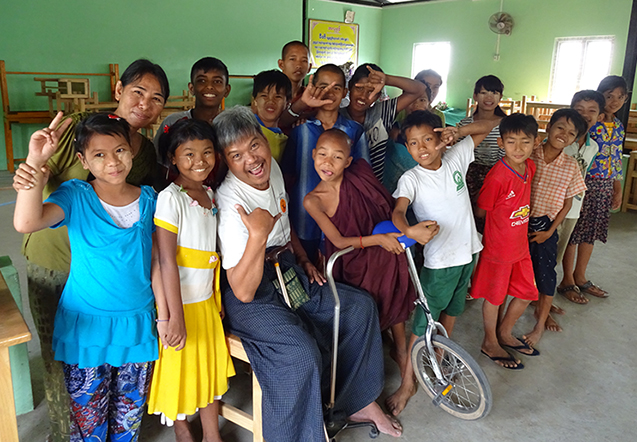 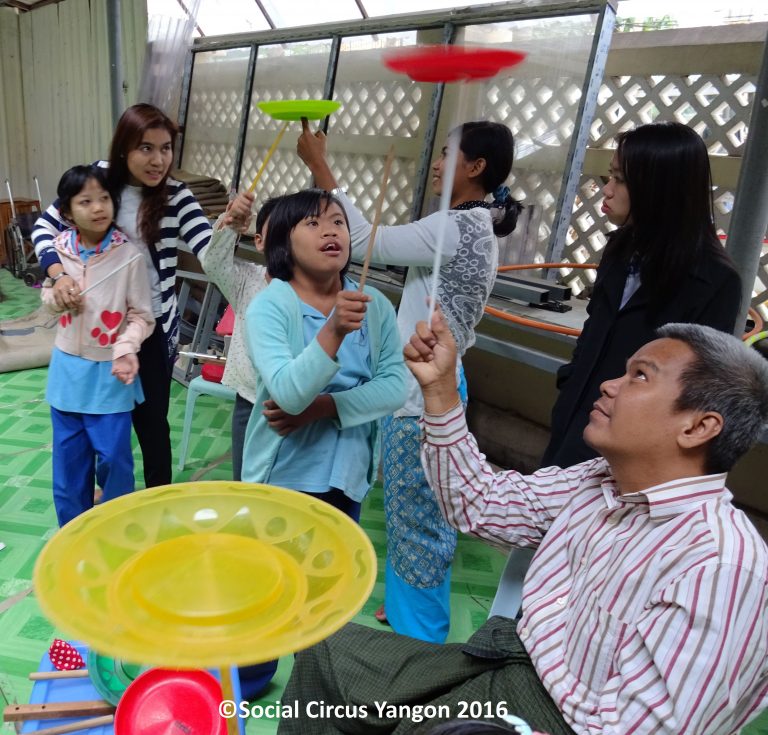 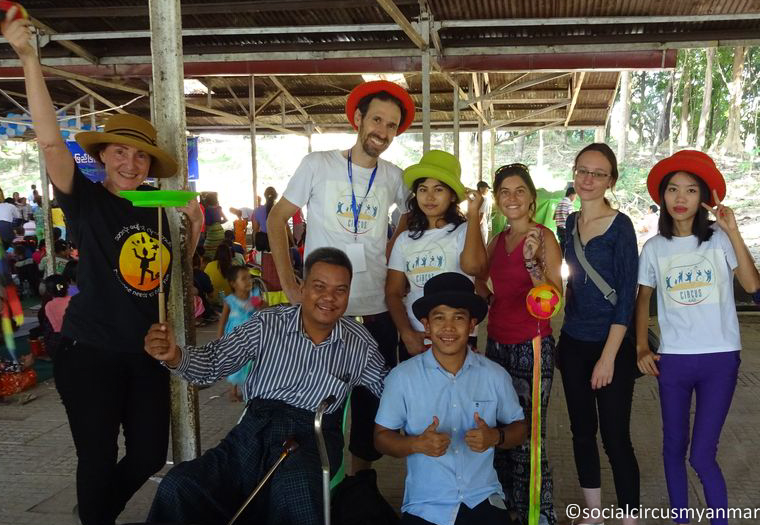 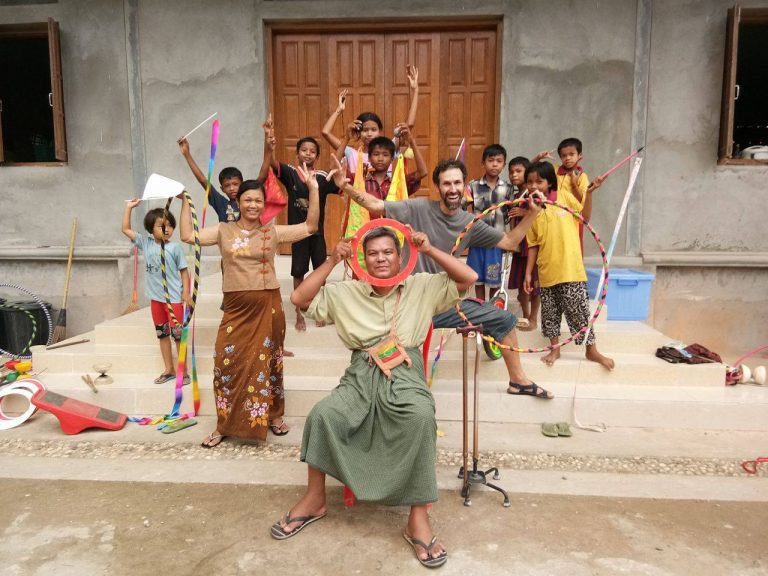 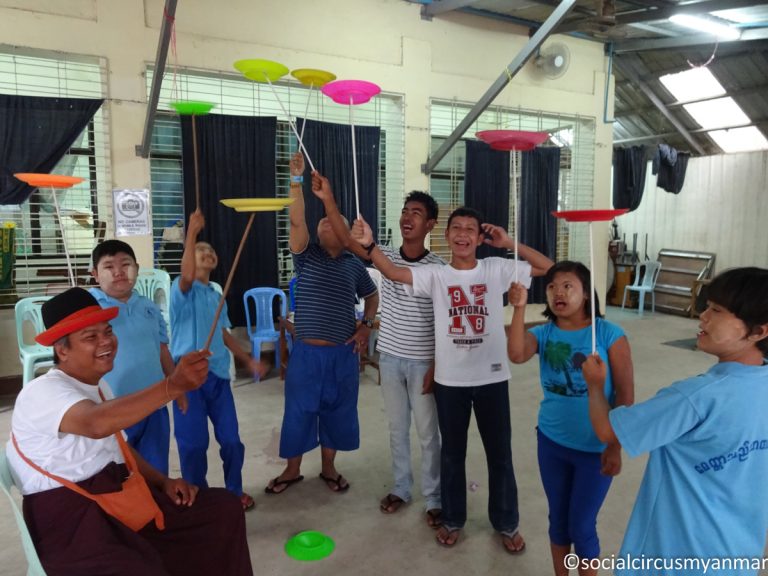 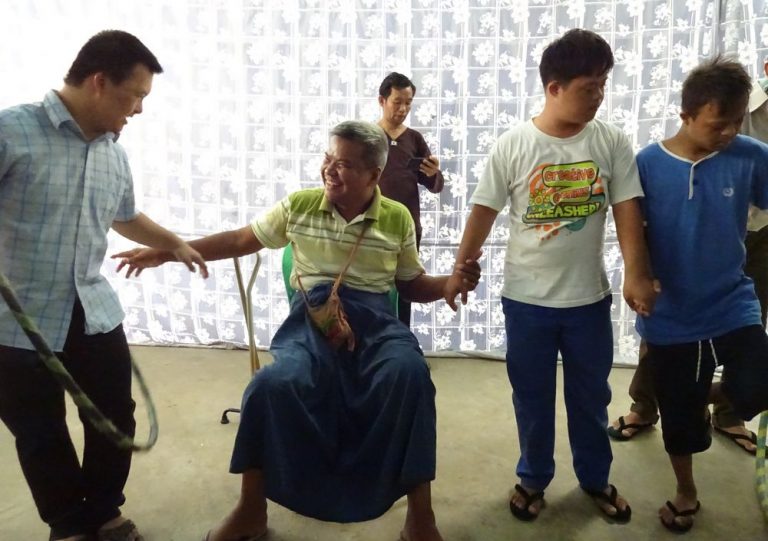 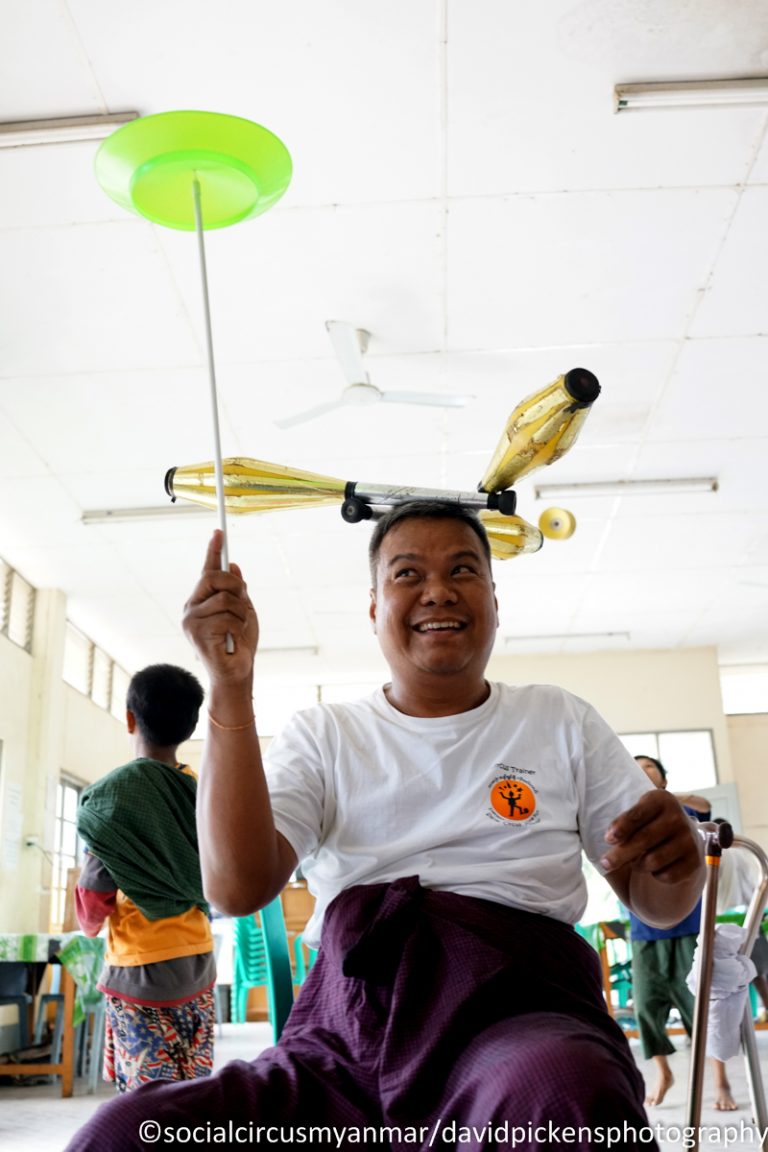 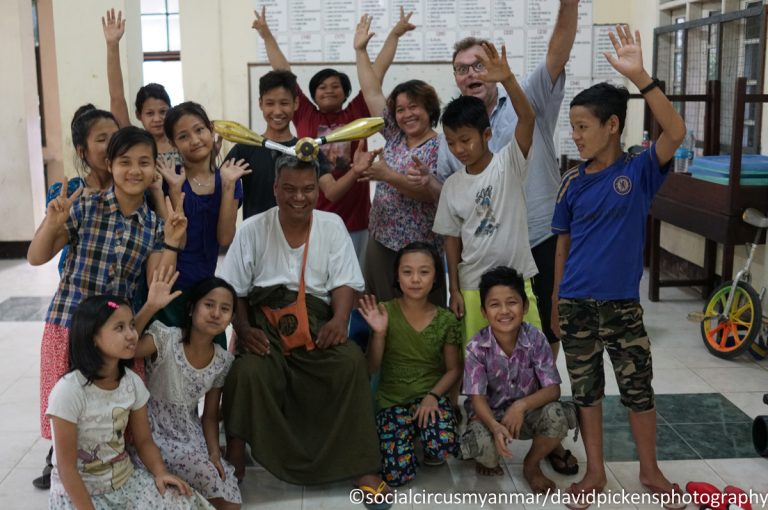 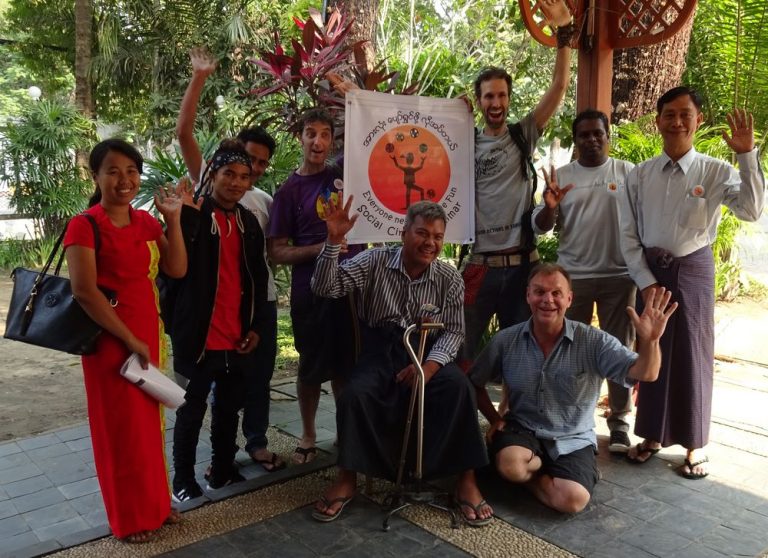 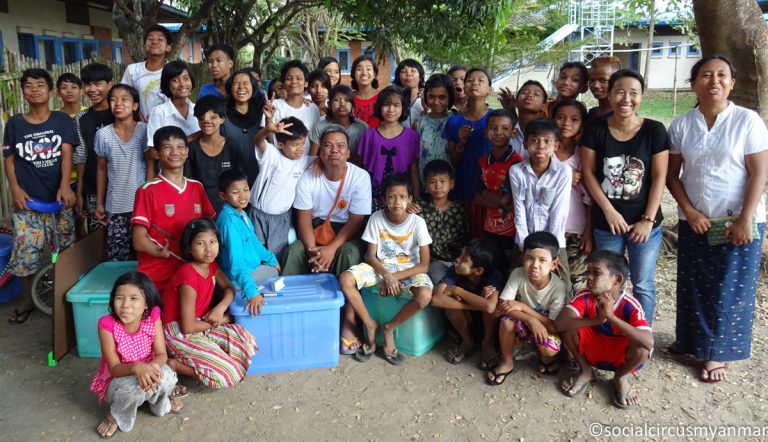 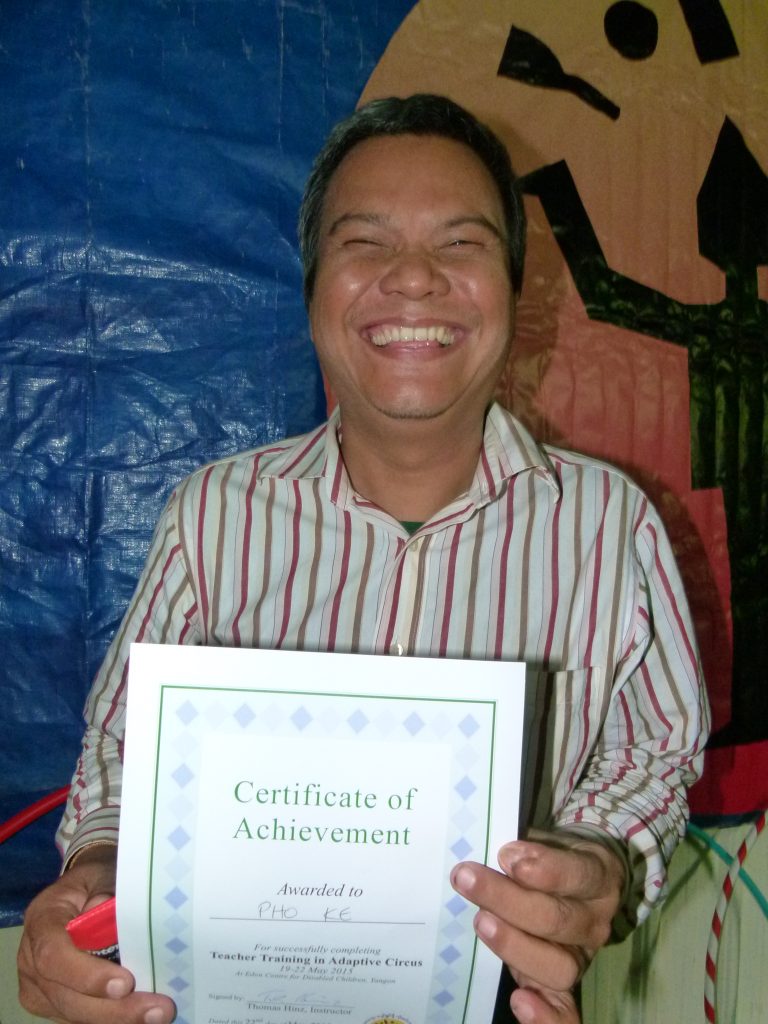 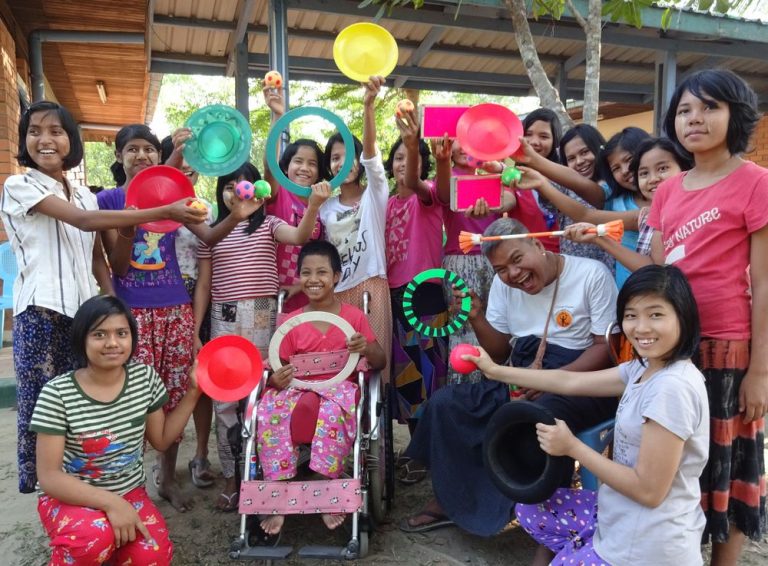 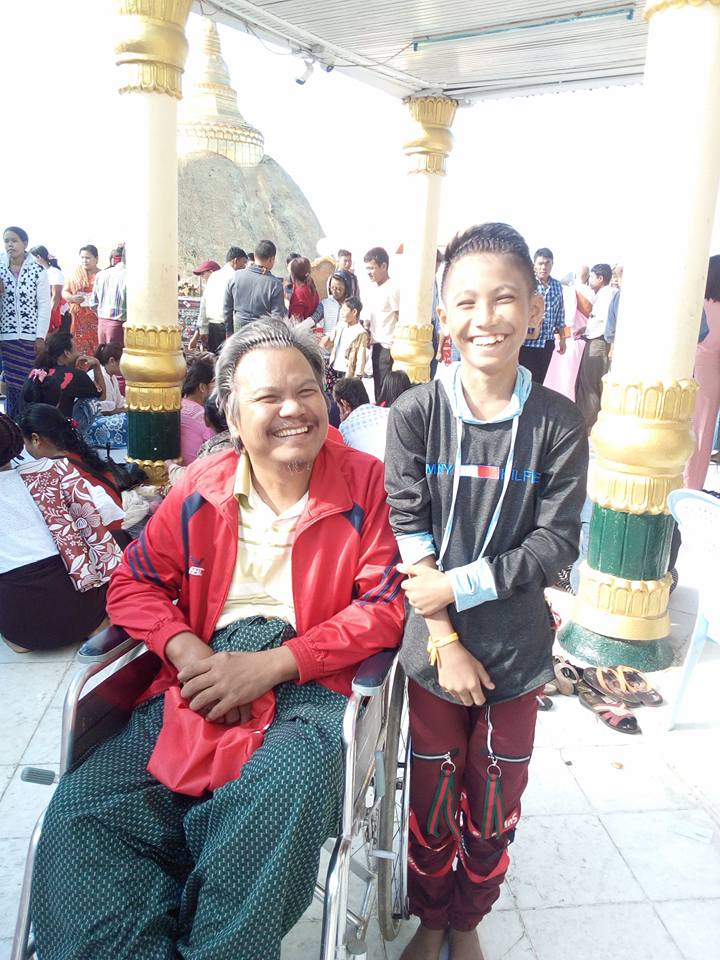 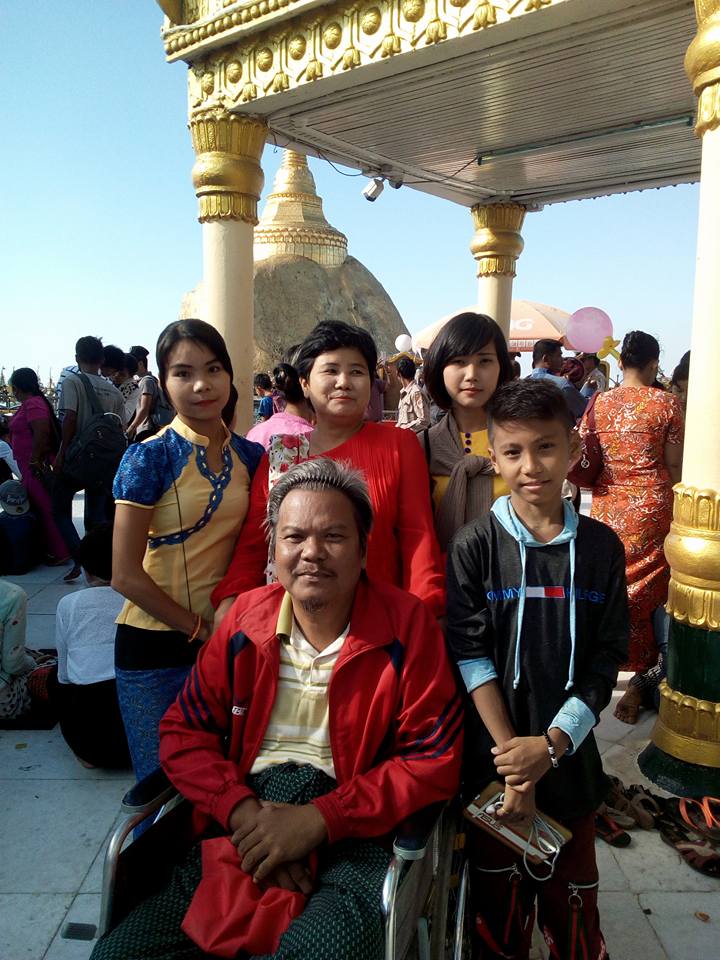 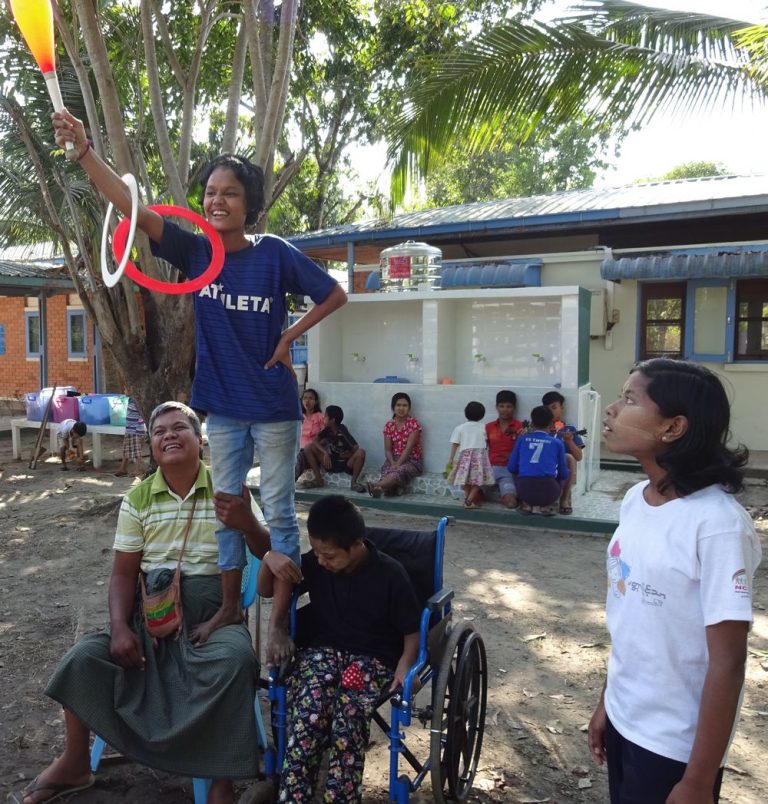 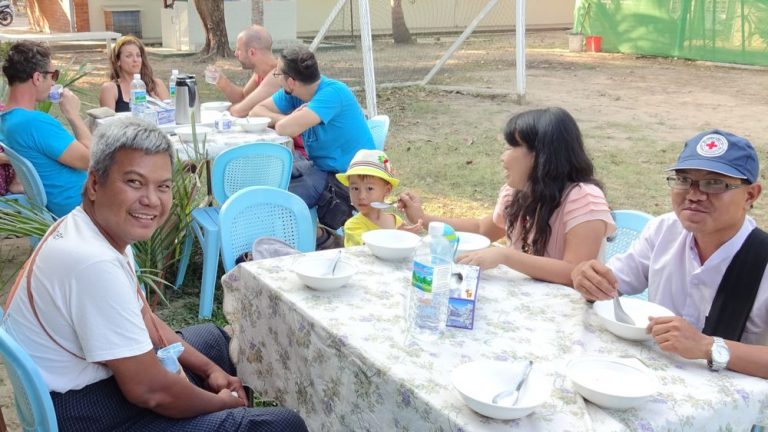 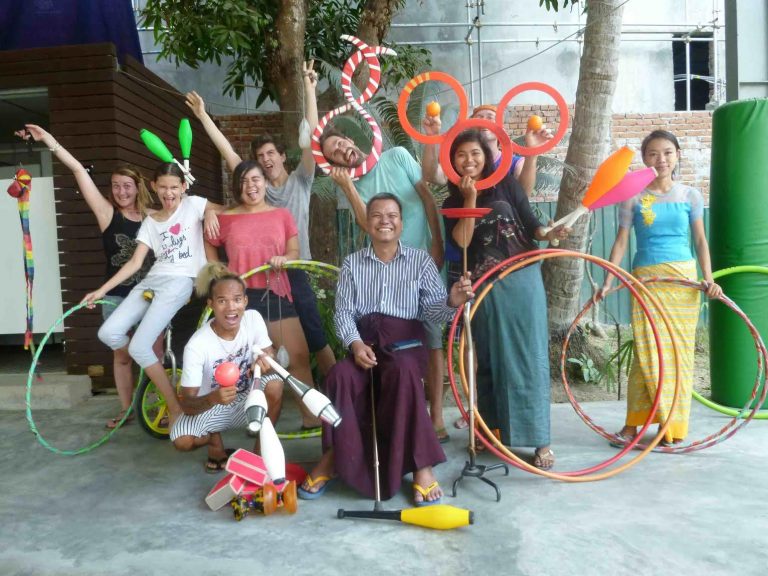 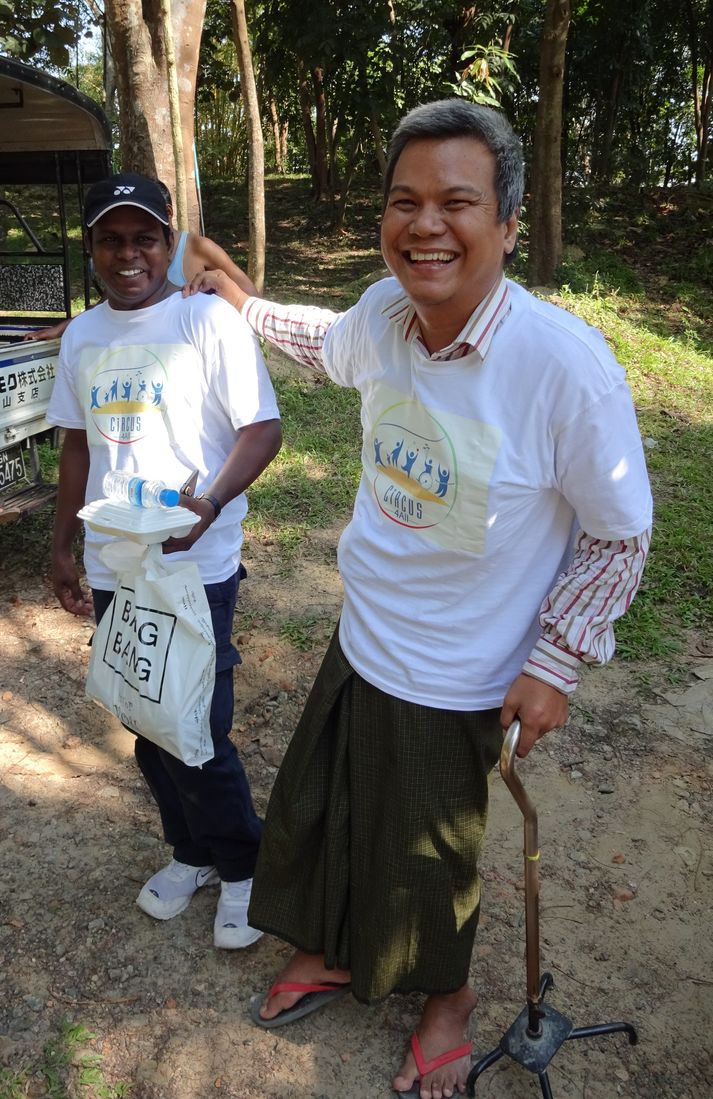 A personal note by Jules Howarth

Our friend and colleague Ko Pho Ke passed away October 16th 2019 in Yangon. This is a great loss. Of all our friends and ‘contacts’ and colleagues in Myanmar Ko Pho Ke was the most generous, helpful and supportive. He drove us to many, many workshops and knew everyone in Yangon – where to find stuff, who to talk to, which road to take, the best short-cuts; he negotiated deals and rentals and purchases and every couple of days he would call out of the taxi window to someone and they would know him. People responded well to Ko Pho Ke, he seemed to have met everyone. Where to find paraffin? He knew. Where to find unicycles? He knew. Where to get stilts made? He knew. What’s the real price of this house rental? He knew. What are they really saying? He knew. He translated for me – and helped me improve my Burmese language skills – and he always got an answer/result for the strange questions we were asking – Ko Pho Ke we need plastic beads to put inside juggling balls?  He literally always went the extra mile in the car to find what we needed to find.

We could not have done our work in Yangon without his help and kindness – and when he was unwell and unable to drive us he connected us with his brother, his other taxi-driving mates and explained to them where they needed to go. A living ‘the knowledge’ of Yangon as good as if not better than a London Cabbie – he knew the city inside out – never with a sat-nav or phone app, he just knew the city and all its outlying areas.

I first met him in December 2014 as we embarked on the community workshops for the 1st Yangon International Juggling Festival project. He was already known as a great driver and fixer for westerners working in Yangon. He fell in love with our circus work. Our first forays into delivering workshop sessions were made possible by his knowledge of location, translations, contacts and support.

Ko Pho Ke had polio when he was a child and this led to life-long health issues.

He suffered a stroke in December 2014 just before the festival so couldn’t see the rewards of his effort first hand. He had recovered bu May 2015 enough to join the Training of Trainers sessions we held at the Eden Centre and led by Thomas Hinz.

He had a heart attack in the summer of 2018 and since then never recovered fully though he did join us several times during the 2018-19 season teaching at Parami Monastery School, a workshop session that he arranged for us. So I saw quite a bit of him. In his house he had the large vinyl photos of his circus work on the walls. He was on our Board of Directors of Social Circus Myanmar and generously stored equipment and props at his house.

He was treating his heart condition with natural Myanmar medicine and with meditation. He meditated a lot and I last exchanged messages with him from Mount Popa where he was meditating and seemed in good spirits.  That was on October 8th 2019 and on October 16th he died.

He was a friend, a good friend, and we spent many hours, good and great times together. He loved the circus work we do, especially as it engaged children living with disabilities and he wanted to learn more so he could teach them. Working with us and training with us he became Master of Plate Spinning – a Saya Gyi – a Master – and when he had the strength he taught at our workshop sessions the art and skills of plate spinning to many Myanmar young people and kids, called out instructions, helped manage the workshops. We made sure that he had access to where we worked – not too many steps to climb – he was someone with limited mobility and we did our best to make sure he could reach every venue. My heart sank on the few occasions that he couldn’t access places.

He was a friend that I wanted to know for the whole of my life; now I have only his memory and that will stay with me in my heart and soul. Social Circus Myanmar was built on Ko Pho Ke’s efforts and work and we will continue to honour him as our Master of Plate Spinning our Saya Gyi Pho Ke.

He is survived by two daughters and one son and his wife Wai Wai.