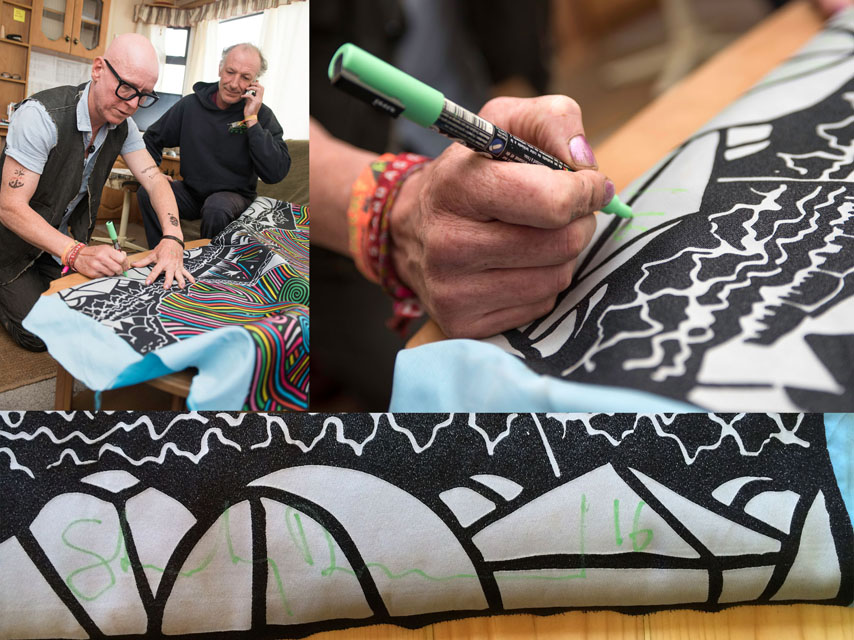 Our fundraising for the Social Circus Myanmar project has received support from people around the world who are backing our prgramme of workshops with at-risk and vulnerable young people in Myanmar (Burma).

Our startsomegood.com crowdfunding has just finished with 75 supporters pledging $3416 for our third dry season programme in Yangon. Thanks for being part of the fun everyone. We’re inspired and humbled by your response and messages of encouragement.

FUNdraising with an ebay auction

Now we’re privileged to be auctioning an extraordinary piece of art from the 2016 Glastonbury Festival of the Performing Arts as we continue with fundraising for this year’s programme. Juggler extraordinaire Haggis McLeod, who runs Glastonbury’s Theatre & Circus fields, joined us in Yangon last year for the International Juggling Festival. This year he introduced me to Glastonbury festival’s resident artist Stanley Donwood, well known as the artist behind the Radiohead album art since 1995.

Stanley’s official festival artwork is visible everywhere during the festival, from the big screens on the stages to the posters and programmes, and the coveted wristbands on every festival-goers wrist. Stanley liked what he heard about the social circus project in Myanmar and gifted the Serious Fun Committee a 3 metre by 1 metre tapestry created from his original 1 metre-long Glastonbury 2016 linocut.

He named it “Somewhat Slightly Dazed” in homage to David Bowie who died as he began working on this year’s festival.

“David Bowie made a song called Unwashed and Somewhat Slightly Dazed back in 1969. As well as being an homage to Bowie it’s also a good description for most of the people at the festival. It’s a picture of the motes that whirl in a blue summer sky when you lie on the grass, and of the endless passages and messages drawn in the air by birds and insects, and a paean to beautiful hallucinations. Here we are, anchored to planet Earth, unwashed, and somewhat slightly dazed.”  Stanley Donwood, June 2016

The tapestry is one of only two created and has been signed by both Stanley Donwood and festival founder Michael Eavis.

Meanwhile on the ground in Yangon, our team is battling Yangon’s notorious traffic jams and hot humid weather to lead workshops, spread the word about social circus, and work with our local partners to develop plans for a social circus network and arts centre.

We started this season with no funds but a firm belief that the young circus teams in Yangon deserve supporting, and we are grateful for our friends and contacts around the globe who are backing the project in any way they can. Any ideas for fundraising, please leave a comment below! Click here to check out the auction progress on ebay.